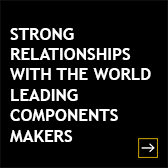 Its logo is a yellow R representing a man silhouette ready on the starting line, which is the symbol of the dynamism that has marked the company growth.
One letter, the “R”, and one colour, panton yellow 116, which nowadays mean quality, full range, excellence in logistics,business and growth support to wholesalers and garages all across the automotive market.

DECADES AFTER DECADES, OUR STORY

Rhiag was set up in 1962, in the great economic boom, a period that fostered the progressive motorization in Italy. The Country had started the construction
of a modern motorway network and Italians started to travel by car.

In such background not only did Rhiag perceive that the growing car immatriculations needed a wider and more efficient sales and services organization to trade its spare parts, but it did more: it addressed the Italian car manufacturers as a representative of important German companies of first equipment parts.

Rhiag is at full speed in building its sales organization. It inaugurates the new Milan headquarters in addition to the spare parts warehouse. With its 15 distribution
branches. Its presence spreads all over Italy. Its network of sole sales representatives links the company to its customers: the spare parts dealers.

By the end of the seventies Rhiag represents a great number of spare parts manufacturers (the so-called ìRappresentate Rhiagî) in Italy and it commercializes
almost 40 product families. The international development starts with the creation of Rhiag Switzerland.

Rhiag gives a boost to its Information Technology systems and, innovation oriented, it introduces a new management software, that develops into an important competitive advantage versus competitors.

The company has 250 employees. The warehouse capacity is over 100,000 m3 and the turnover reaches 150 billion liras.
The core business is the independent distribution chain to wholesalers and Rhiag builds customer loyalty with services, a wide range of products and the best technical
assistance on the market. At the end of the decade, the business for first equipment supplies to Italian car makers is transferred to Rhiag Engineering company.

Rhiag keeps on developing its logistic network: 21 branches and a new central warehouse in Milan, managed by a radiofrequency system that makes stocking and picking more and more efficient. Thanks to the steady growth of products offerings, many new brands become part of Rhiagís portfolio, all with first equipment quality.

Besides traditional logistic services and product range, a third strategic asset is added, with the aim of providing support services to wholesalers and garages.
Logistic networks double in ten years including stocking capacity, and the network information systems. The e-Commerce side of the business is launched, and it is bound to revolutionize the wholesalers’ way of placing orders. Multibrand garages network are developed, extending the competition against authorized networks.

Nothing about Rhiag is slowing down: new products to seize new businesses, market penetration where Rhiag’s presence is missing, and complete the product offerings.

Rhiag faced the new decade with renewed strength. In 2012 it celebrated its first 50 years. It became the center of a leading European distribution group of spare parts for cars and industrial vehicles. It still pursues the growth path both domestically and internationally. Through the acquisition of Auto Kelly, it strengthened its presence in East Europe and furtherly expanded it into new markets. It also introduced the Starline private label to the Italian market, the first of its proprietary brands. After incorporating ERA, it enhanced its electrical products range, it reinforced its private brand strategy and enlarged its export business.

Rhiag continued to diversify its business in 2016 with the acquisition of Motorparts, a distributor of spare parts for motorcycles, and in 2019 by welcoming in the MD2 Milano Distribuzione group, dedicated to products for body shops.

In 2019 it joined LKQ Corporation, an American distribution group, listed on Nasdaq and operating globally.

Rhiag is now an integral part of Europe’s largest distribution group: LKQ Europe, which employs around 27,000 people in over 20 European countries with a network of 1,100 branches and more than €5.2 billion in sales in 2019.

The group is represented not only by Rhiag Group, but also by Euro Car Parts, Fource, Elit, Auto Kelly, Stahlgruber Group and Atracco, a specialist in remanufacturing products. LKQ also holds a minority stake in Mekonomen.